The next morning we were in for a long day, so we woke up early to get packed up, check out,  grab some breakfast, and get to the Australia Zoo right right when it opened, around 9 am. It was only about a 20 minute drive from Mooloolaba, but by the time we got there the parking lot was already quite crowded! But we found a spot and paid the $57 (per person!) entrance fee. I always have conflicting feelings about zoos. They are, of course, all very different, with different policies and missions. I don’t like that most zoos are geared towards children – can’t animals – zoology – be an adult interest, as well?? haha, anyways, Australia Zoo has a strong conservation message, which is great, and donates a substantial portion of money towards conservation projects. It seems to be doing a good job carrying on the dreams of Steve Irwin, as now his wife runs the zoo, and their children play an important part in it as well.

We grabbed a map of the zoo and saw that at 11:00 they were doing the croc show – which of course, we couldn’t miss! So we got to the “Crocoseum” and grabbed some seats in the blazing sun and waited. We were early, so we were subjected to an interesting sight – Bindi Irwin performing an animated song & dance routine with her “Jungle Girls” on stage for a mass of children below. After a little bit of waiting, out came Terri Irwin, Steve’s widow, to begin the croc show…but unfortunately there was some commercial things before the show could start – first, I guess this just happened to be on the day we were there, but Terri spent a good 20 minutes talking about a child recovery bracelet plan for Queensland, having the police chief and a representative from the company there and saying how she uses it for her children for a slew of news reporters. It was so random. Anyways, after that, those people left, and Bindi came out to join her mom, and then it was time to introduce Bindi in her first feature film – Free Willy 4 or 5 or something. They played the trailer for it on the big screen. After all that was out of the way, the croc show finally started!

It was quite fascinating, to watch them lure this particular croc, called Digger, out of his pen and down the canal into the viewing area. They basically had to tempt him into attacking, stomping on the ground near the water, splashing the surface of the water. He was beautiful! Terri got up on the platform to show how crocs can use their tails to propel themselves out of the water to snatch food out of the air – quite impressive! 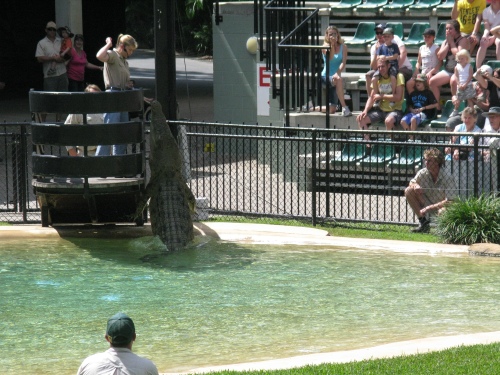 Then Bindi had her turn, as she is learning the tricks of the trade of her parents. Her “uncle” Will (Steve’s best mate) had her by her shirt, guiding her where to go and watching the croc’s body language very closely.

After the show was over, they had to get the croc to swim back to the holding pen, so Will got into the pool and swam for his life as the croc chased him underwater and into his holding pen! Pretty amazing.

What was a real surprise was that as I looked around the “Crocoseum” I looked up at the VIP section and recognized, with a start, the infamous Captain Paul Watson, leader of the controversial anti-whaling group Sea Shepherd. He must have just finished his season (he was patrolling Antarctic waters at around the same time I was there) and stopped by to visit Terri. One of his ships is named the Steve Irwin, in honor of the man’s passion and conservation efforts and common interest in stopping whaling. 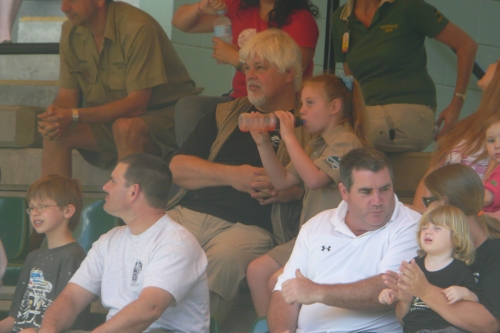 Some people view the Sea Shepherds as “eco-terrorists” but I think that they are doing important work, picking up an issue that no one is really doing anything about and tackling it right at the root of the problem- the whaling ships themselves. His actions attracted the attention of the Discovery Channel, which made a show about their efforts, called “Whale Wars” which has in turn brought more attention and interest to the issue. Maybe one day I can volunteer on a boat….

Anyways, after the show we walked around the zoo, visiting the various exhibits. There was “Roo Haven” area where you could go in, and feed the freely roaming roos. We bought some roo food and went for it!

feeding and petting the roos - they're so soft!

spooning with the roos!!! 🙂

We walked around some more, seeing a tiger exhibit/show, which was great because they had a great exhibition about the exploitation of tigers for their parts for various magical remedies. They had a collection of Asian products with tiger ingredients, promising to cure various diseases or afflictions and to of course, make a man more manly. Its quite frightening. I absolutely love tigers, they are one of the most stunningly beautiful animals on the planet, and it is such a tragedy that they are endangered and yet still exploited by magical-thinking primitive people. I recently read this really well-written article about a so-called “tiger park” in China where hundreds of tigers are bred for dubious reasons. It is illegal to kill a tiger, so what these people do is put cage them in wretched conditions, in the poorest health, barely kept alive and basically waiting for them to “hurry up and die”. Once dead, their bones are used to make “tiger wine”, a popular drink with, once again, supposed magical healing powers, sold for hundreds of dollars. It is absolutely, dreadfully horrifying.

Anyways, on a lighter note, the Australia Zoo has a dedicated conservation program specifically for tigers and they donate money to the cause regularly. After the tigers, we went back to the Crocoseum to see the free flight birds of prey show. It was a little disappointing, but they brought out some really cool birds, like a (juvenile) Andean condor – one of the largest birds in the world (and largest bird in Western Hemisphere) with a wingspan of up to 10.5 feet! Even the juvenile was quite impressive, although he wasn’t full grown and didn’t have his handsome adult plumage yet.

Our time at the zoo went by really fast, and before we knew it, it was time to leave. We stopped by the gift shops to look at the different Australia Zoo paraphenalia (Bindi had her entire line of super-girly items, ugh) and bought some souvenirs. All in all, the Australia Zoo is definitely worth a visit, with the croc show and roo haven and various animal exhibits. I just wish I could have gotten a picture with Captain Paul Watson! 😦 oh well…

After we left, it was time to start heading back up north. In a perfect world, we would have had endless time and money and could keep going on south to visit Brisbane, then Sydney, then Melbourne, and everything in between. But, very grudgingly, it was time to turn around and start heading back north to Townsville. We needed to drive as much as possible because our next plan was to stop around Mackay and visit the beautiful Eungella NP. The furthest we could get that night was Bundaberg (just a couple of hours north of Hervey Bay).

There really isn’t much to the place, except that it serves as a large base for working backpackers, and is home of the famous (and famously worst-hangover-inducing) Bundaberg Rum. Part of road tripping up and down the Queensland coast is driving through endless fields of sugar cane – I forgot to mention this earlier because it became such a common fixture in my mind. Anyways, referring to the handy Lonely Planet guide, we chose a hostel that went by the name of Cellblock Backpackers. A jail-themed hostel that was, in earlier times, the Bundaberg prison/courthouse! We called ahead and booked a double, which was supposed to be in a holding cell. We arrived later than we thought, around 11 pm, and were told that the manager of the hostel had some friends come in and gave away our double room 😦 boo…but they put us in a dorm room which we had to ourselves. The dorms were 4 beds in what used to be offices. It was a pretty interesting hostel experience. 95% of the backpackers in Bundaberg are there for work – the Cellblock actually supposedly does a pretty good job with helping backpackers find work (mostly fruit-picking or working on the sugar cane plantations). We, however, where just passing through, and tired as we were after a long day (and drive, which Ethan bravely completed), passed out pretty much immediately. For a memento of our time spent there, we nicked the pillow cases which bore the name of the hostel.